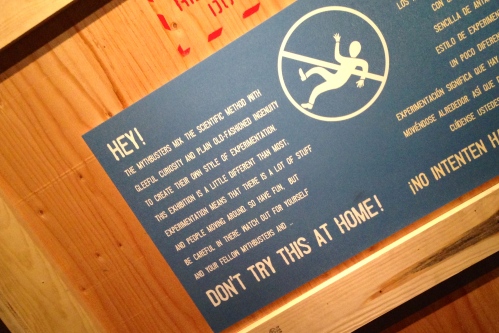 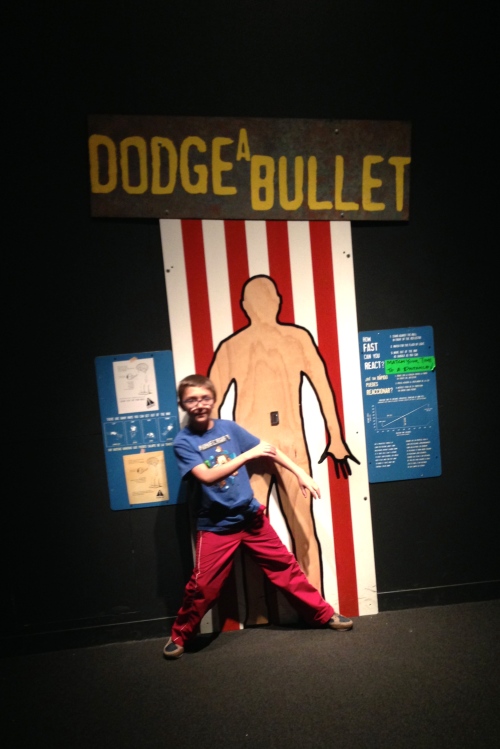 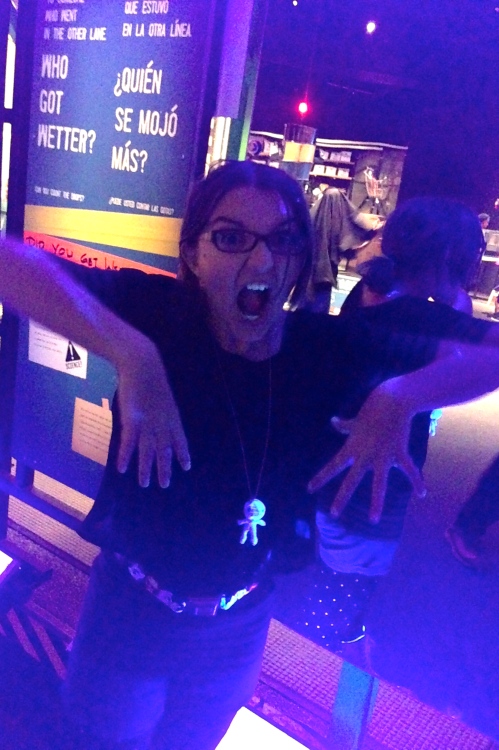 Over the spring and summer, the Denver Art Museum (the DAM) had an amazing exhibit entitled Spun, featuring fabulous textile art of many kinds. I told you a bit about it, specifically the Denver Satellite Reef. Crocheters from all over contributed their own pieces of coral to the reef, including me.

At the same time, the Ladies Fancywork Society created an amazing crochet installation that hung on the outside of the museum. 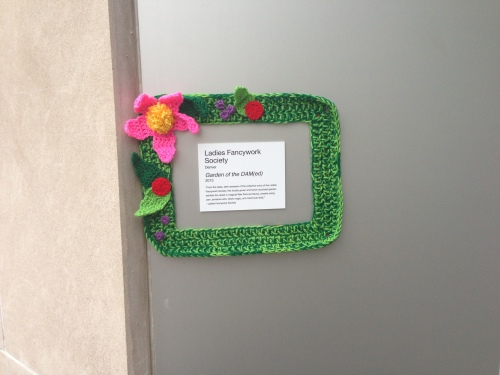 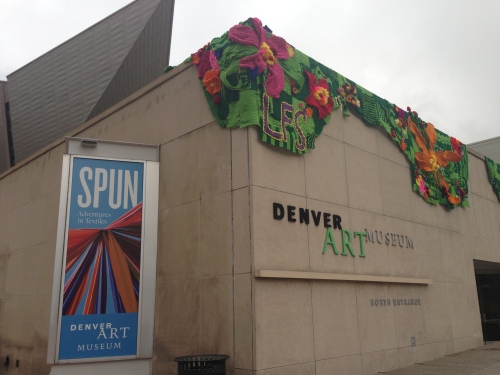 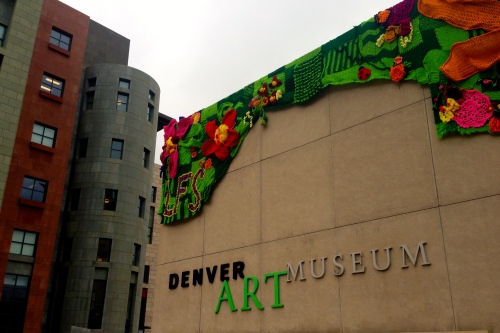 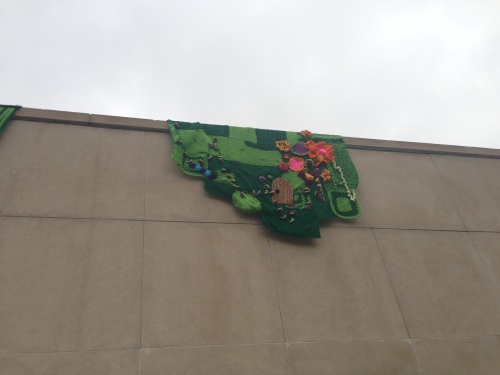 The pun lover in me was extra super pleased by the title- Garden of the DAM(ed). The piece was amazing- HUGE! COLORFUL! QUIRKY! It had flowers, fairy doors, gnomes, mushrooms, squirrels, a black widow, and so much more.

On the last Friday of most months, the DAM hosts an awesome event called Untitled. Each month has its own theme, fun activities, snacks, and more. Best part? It’s free with membership, which we have.

In August, the LFS were onsite to talk about their piece and teach folks about yarn tagging. (Fun fact: they’ve been told that any attempt to yarn tag Bluecifer would actually result in terrorism charges.) Annie and I went and had a blast- and we learned that the September event would be extra awesome, with a harvest theme. As part of the harvest, the public was invited and encouraged to “harvest” pieces from the Reef and the Garden of the DAM(ed). I loved the idea of the reef continuing to live on all over the city…

And it was even better in practice! People had so much fun choosing their piece of coral (one per person). Many many folks actually found ways to wear theirs, as scarves, hats, corsages and more. 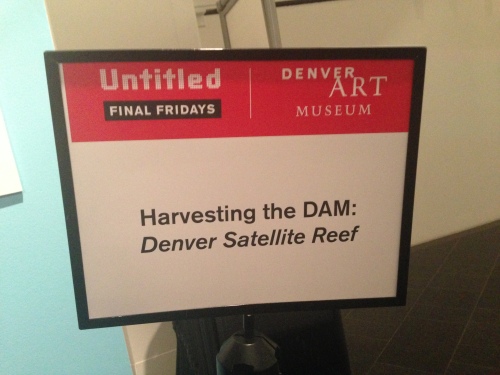 I’m shy about taking photos of strangers, so you’ll have to take my word for it. It was awesome! Annie, my mom, and I each harvested a piece- none that I had made. My mom picked a tiny piece that looked like an actual shell, Annie picked a long long piece that she can wear as a scarf, and I picked a fun piece of many yarns that Annie is holding in the photo below.

Over the course of the night, the reef went from this: 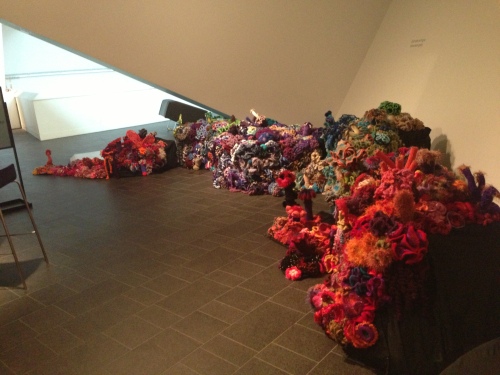 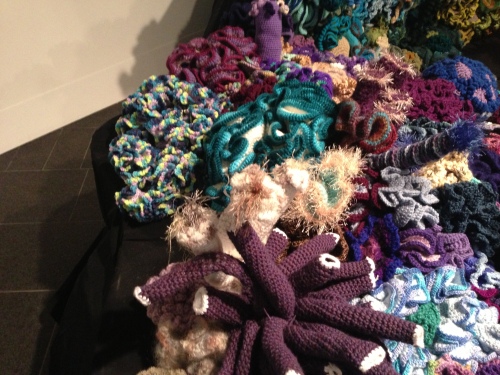 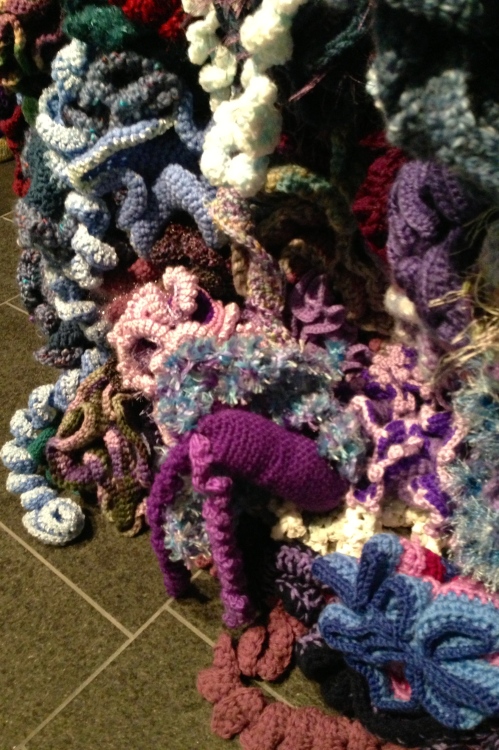 To WAY less than this:

We got there at the early end, and I was quite thrilled to see that my monster piece of coral had already been claimed! I have no idea what happened to the other pieces I made, but it’s fun to think of them going on to new lives…

After harvesting the reef, we moved on the see what was left of the Garden. I was thrilled that a gnome was still there! And Annie chose a string of flowers- she’s planning to alternate between using it to decorate her room, and wearing it as a scarf.

How often do you get to touch the art at a museum, let alone choose a piece to bring home? I love the ways that the DAM finds to bring people and art together. Can’t wait til the final friday in October!

Sticks and Stitches 2013, or, How the Avs REALLY broke the Blackhawks’ Streak…

Last night was the long awaited 2013 Sticks and Stitches game at the Colorado Avalanche. Whee! I went with some yarn loving colleagues, and when a friend couldn’t use her ticket at the last minute due to a family emergency, I let Annie come along. I told her that as she was taking a knitter’s seat, she had to give knitting another chance. She agreed! We dug some snazzily colored but cheap yarn out of my stash, and I got her started on a scarf… 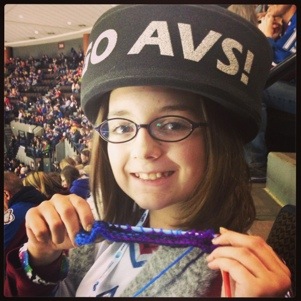 By chance, the Sticks and Stitches game was Avs vs Blackhawks. If you’re not a hockey person, you may not know that the Hawks were 21 games into what is considered one of the most amazing winning streaks, ever. The Avs aren’t exactly having a stellar season, nor did they have one last year. They lost to the Hawks in the last seconds of a game earlier this week. It was shaping up to be an uuuugly night for Avs fans. Not to mention, there were an ungodly number of Chicago fans in the arena, and many of them arrived drunk and mean- and only got more so as the evening progressed. I was having some flashbacks to the years when I lived mere blocks from Fenway Park, and would practically have to hide in a bunker when the Yankees came to town…

We made our way to our seats in the reserved Sticks and Stitches section. There was some confusion, as the group had a table full of awesome freebies from Interweave, but they had been made to set up on a different level from the reserved section. Why? Who knows- it was chaos last night.

And then there was the game. It was insane. We ended the first period tied, with some hope for Avs fans.

And then, the second period. Back to back goals, and then two more, and we were up 5-1. It was so exciting that many of the knitters in our section put the knitting down in order to pay even more attention to the game! I had held off on working on my socks all week so I’d be at a good mindless knitting point for the game, and I didn’t even make it all the way through the final 8 round repeat!

Annie screamed herself literally hoarse. (It’s a really good thing we’re skipping her acting class today due to weather- her teacher would kill me for sending her in such a state!)

And the only reason I can think of is because knitters and crocheters were representing. What else could it possibly be?

Regardless, it was a fun night out with friends and Annie and fiber and hockey. And now I’ve got a snowy Saturday ahead of me where I can actually focus on finishing that sock… What are your plans today?